Hey guys this is Daniel J Leach Jr founder of Social1776.com and I just wanted to share this amazing Natural remedy with you check out https://themiraclesalve.com/ or send them an email for more details pruittstreeresin@gmail.com 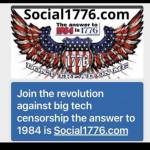 RED ALERT 🚨 SOS 🆘
I’m getting word that something big like The (((Purge)))is going to happen in Chicago Illinois next week this is big time talk in the prison system anyway I will be doing a podcast with Rexton Lotus Rae Justice talking more details about this possible situation. This has something to do with the changes in gun laws.
https://video.social1776.com/v/ufgSPY

988 is a new phone number that recently went live to help people get help in a mental health crisis. Similar to 911, this line is dedicated for anyone in need of mental health assistance of any kind.
Can I get 2 friends or family members to copy and re-post? I am trying to demonstrate that someone is always listening.
#suicideawareness call 988
Just two. Any two. Please.
Say Done.

🚨Emergency calling campaign for Pearline Jackson Jones! 70-year-old Pearline is in the Robert Presley Detention Center in Riverside, California, where she called me yesterday Sunday July 3, 2022 saying she had a fever and she was being denied Tylenol so she could break the fever. She sounded extremely weak & could hardly talk. And she actually mustered up the energy to ask me if Nappy Head Roots was still in jail in San Jose. I am asking everyone to get everyone they can to call Robert Presley jail and demand that Pearline get medical treatment!

She has been complaining of denial of medical treatment for months if not longer in these facilities. She can't walk without a wheelchair, yet her wheelchair was taken from her before in one of these jails so she was forced to crawl around, apparently as retaliation for her complaining to the deputies. She also is supposed to be getting court-ordered medical care, including being taken to an outside eye doctor, but she said the jail says they don't have to follow the judge's orders. What is surprising about this is the jail says they don't have money to administer medical care to inmates yet Governor Newsom says there's a state budget surplus. Right now Pearline sounded like she is in grave condition! I have *never* heard Pearline sound like this, ever! And I've been talking to her for almost a year and a half now since after her recent arrest.

📞📱 ==>>>!!!So here's what we want people to do: *Call the Robert Presley Detention Center at 951.955.4500 and demand she get medical care!* We expect her to recover fully! She says in her isolation cell, where she was put in this jail after she was assaulted by 3 female inmates at the Riverside County Jail giving her a knot on her head a few weeks ago, that her food and water are being contaminated. I heard a similar story from Valencia Nez TI regarding her stay at the Navajo Nation Jail in Tuba City, Arizona, regarding the food having strange substances observable in it and strange reactions to it.

Pearline wanted me to post her playlist from YouTube about the Riverside Water Department showing evidence the water coming from there into her kitchen (the only water left as the rest was cut off) was contaminated as well. Here is the playlist: "How they are poisoning me": , regarding the Riverside Water Department and a Miss Lavera being responsible for this. 📞📱 ===>>>!!!*Please also call the Riverside County Sheriff at 951.776.1099 and let them know, as we want the jail to know, that we are watching this case of hers with her *Booking #200210162*, that we require Pearline get medical treatment for her fever and anything else she needs, and that we expect Pearline to fully recover from whatever is causing her fever. She was not sick until she got to this jail! Recently she has been telling me she was getting sick after drinking the water and eating the food made available to her. She was getting worse and worse, yet on June 28 she was still talking normally and was in normal spirits. She told me on that day that after she eats food or drinks water (if I recall correctly), she gets wired and then tired. She said it's basically the same thing that was happening to her in 2015 (as seen in the above YouTube playlist).

For the record, I talked to an attentive person at the Riverside County Sheriff's Department yesterday who assured me she would call the jail and notify them as to the situation. And then I spoke with a Mejia at the Robert Presley Detention Center who assured me that Pearline would be taken care of. I'm just making sure many eyes are on this situation as Pearline sounded in terrible condition and we want to make sure she survives this and is in fact getting the care promised.

Pearline is a wonderful lady from Chicago who has been targeted everywhere she goes for years. She has told me many credible accounts of these occurrences, including certain people being hired to follow her across the country. She's highly intelligent, did computer work back in the day. And she's compassionate and caring towards others no matter if she is in jail or hospital or what. She's a good person who got into trouble last February after a Greyhound driver skipped her stop and left her stranded. She was harassed relentlessly by cruel people in Indio where she was stranded. And the day before her arrest she was assaulted by a man with a stick (just like Anna Taylor before her arrest getting assaulted). So that would traumatize any homeless person and could contribute to a situation that might result in "enhanced" charges as Pearline is facing. In addition, her case involved fraud in the court, as just before she got sick after drinking the water in the current jail, she had found out that a while back her sealed court records from one case were to cover up the fact that the judge, the district attorney, and the prosecutor had a conversation behind closed doors where Pearline was slandered and lied about saying she'd had a stay at a psychiatric hospital in Oregon, a state where she'd never set foot. In addition, she's had 4 arraignments for the same charge. And her complaints about her lawyers have gone unanswered that I know of. She has a court hearing coming up around July 12, and the court has until mid-August to give her a trial. Let's hope Pearline gets an opportunity after about 17 months of incarceration to be released so she can try to rebuild her life and look after her health. She is elderly, but was still in good spirits despite being incarcerated.

Make some calls on Pearline's behalf and help her get the humane treatment she deserves. She's a whistleblower about human rights violations in California jails, and we want her to live to tell the tale. As I said on the Studio 1776 podcast, this could happen to anyone. It could happen to your mother, your grandmother, your daughter, your sister, or your wife. Help keep Pearline safe! Show up for her on the telephone and spread this far and wide! 🌷https://internationalchristian....party.wordpress.com/

You have already rated this page!

Hey guys Join our video platform have a alternative place to store and share your voice and videos without big tech censorship go to. Social1776TV.com

File size error: The file exceeds allowed the limit (9 GB) and can not be uploaded.

Unable to upload a file: This file type is not supported.

We have detected some adult content on the image you uploaded, therefore we have declined your upload process.

To upload images, videos, and audio files, you have to upgrade to pro member. Upgrade To Pro